Cooking with Cast Iron Skillets with its best 5 reviews, a buying guide, its 2 kinds, and ratings. Read more!

Do you ever wonder how much a Cast Iron Skillet can contribute to your cooking life?

It contributes lots of benefits! They are able to do much more than the other kinds of frying pans out there such as baking, braising, boiling, frying, grilling, searing, and even sautéing! But for a quality cooking experience, you must also have a quality cast iron skillet to go with it. In this article, we have provided the 5 best ever quality Cast Iron Skillets found in Amazon to help you with your pick!

What is a Cast Iron Skillet, Cast Iron, Seasoning, and Pre-Seasoned?

What are Cast Iron Skillets?

Before we proceed into buying these products, we must know what they are first. To start off, a Cast Iron Skillet is one of the essential cookware you need in your kitchen in order to cook those most delicious meals either for an occasion, your dinner, lunch, or even your breakfast.

These heavyweight frying pans are made out of Cast Iron. What are they? They are a combination or a group of iron-carbon alloys. It is very useful for its relatively low melting temperature. As for this cast iron skillet, most of the time it is required to season it in order to protect its bare cast iron from rusting. This can also help create a non-stick surface which is quite useful in cooking.

But what is seasoning?

Well, seasoning is a common process in which you treat the surface of any cooking vessel such as a saucepan, wok, crepe griddle, or even the cast iron skillet with a coating that is stick-resistant which is formed from polymerized fat or oil on the surface. This also helps it from ever rusting so quickly when the cooking vessel is being heated.

What does pre-seasoned even mean?

Other than that, there are two kinds of cast iron skillets: the traditional cast iron pan and the enameled cast iron pan. We’ll, later on, discuss what these are in the next few sections of this article.

Why do I need to get a Cast Iron Skillet?

A simple question. But the real question is, well, why not? There are many keen chefs around the world who use Cast Iron Skillets for their most delicious cuisines. The advantages of a Cast Iron Skillet does not only limit to a few but more! They may have disadvantages too. But we can say nothing is perfect. The Cast Iron Skillet, on the other hand, has advantages that can put you to a whole new level in cooking!

Here are the reasons why a Cast Iron Skillet is worth buying:

Once a Cast Iron Skillet is heated, it gets really hot and then retains lots of heat. As you heat, it also spreads all over the pan to make things even.

Since Cast Iron is considered as a very dense metal, it is nearly impervious to any damage and can hold on to heat. You don’t have to worry about your pan being hot only in one area!

Cleaning them is quite simple. Although you won’t be cleaning them the way you usually do with other pans. Unless of course, you’re already doing this method.

Just simply pour hot or warm water on the pan and scrub it with a brush or a sponge then rinse it after. See? Simple!

Another cool thing about cast iron skillets is that they don’t just limit your cooking to a few foods or recipes. They can cook almost anything that can be baked or roasted in an oven!

You can even sear, roast, or even simmer in a cast iron skillet. Cool, right? You don’t have to limit yourself to a few recipes or so when you have a Cast Iron Skillet.

Trust me, it’s going to be a lot different when you are using Cast Iron Skillets. Most cookware made out of aluminum or stainless require quite a lot of oil. But when it comes to Cast Iron Cookware, you are able to save and eat a little healthier.

A thin layer of oil on the pan is all you will be needing to start off.

Because of the Cast Iron Skillet’s ability to heat up evenly and to retain more heat, it is able to act as an oven or a multi-purpose frying pan!

You can go ahead and add those sauces, spices—bake the chicken if you must! The Cast Iron Skillet is made to make your cooking experience more fun and enjoyable.

Try out almost all of your favorite recipes with this frying pan!

What are the things that I should consider when I am choosing a Cast Iron Skillet?

Here are a few factors that you may want to look out for when choosing a Cast Iron Skillet:

All shapes and sizes of Cast products have all their advantages and disadvantages. The first thing that may come out of your head when reading the emboldened word, weight, is, well, how heavy it’s going to be.

Some of you may not like it too heavy as it can be hard to flip while cleaning it or even so heavy when bringing it to the sink. So don’t be afraid to carry it to see if it is alright for you. It can be quite a burden if it isn’t.

A Cast Iron Skillet’s weight is also a major factor to look out for because the heavier it is, it tends to hold more heat and then is able to provide authentic iron cooking style.

Now, as we all know, prices of everything can depend on the brand itself. The range of cast iron skillets can go from something cheaper than a new set of more modern pots and then to a much more expensive price which can be per piece. However, a cheaper price does not always mean that it is less effective.

To have you know, PFOA, also known as Perfluorooctanoic acid, which can cause harm to most people who have low levels of PFOA in their own bloodstream. It’s best to see if this is present in the cast iron skillet. Some skillets have them labeled on them. Be sure to read if ever there is.

What is the right Cast Iron Skillet for me?

Here is what an Enameled Cast Iron Skillet looks like:

And this is what a Traditional Cast Iron Skillet would look like:

An Enameled Cast Iron Skillet is different from the traditional cast iron skillet as it is coated with enamel, an opaque or glassy substance acting as a protective coating. Traditional Cast Iron Skillets don’t seem to share this feature.

So let’s go back to the question, shall we? What is the right Cast Iron Skillet for you?

If you are the type of person to:

If you are the type of person to:

All products will be reviewed according to its pros and cons. 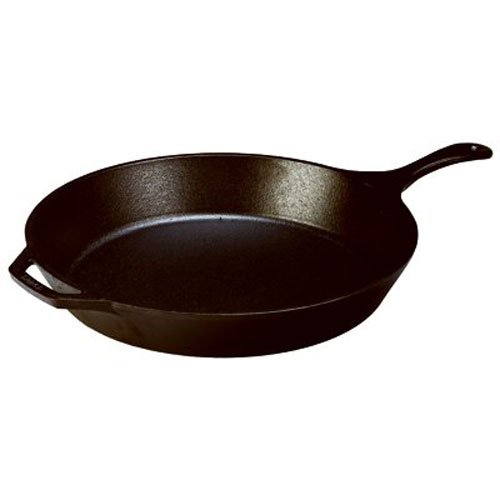 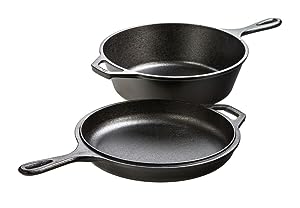 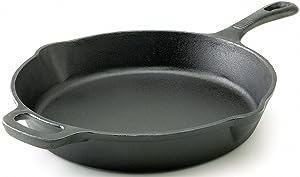 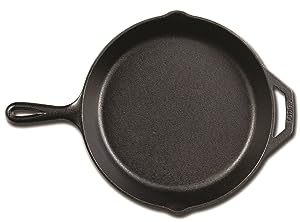 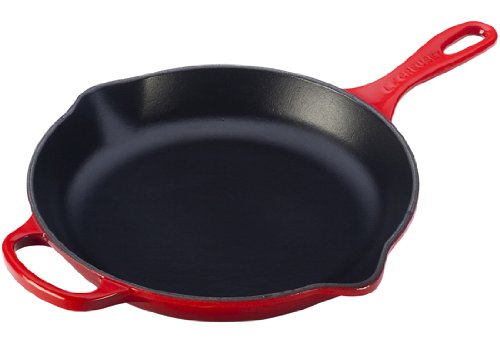 Well, those were our recommendations for the of the best cast iron skillets! Don’t ever forget to consider the factors of our buy guide before buying a cast iron skillet of your own. But you’ve read all there is in this article and there’s nothing better than the 5 products we have reviewed so far! Go ahead and try one of them out and see for yourself. Thank you for reading!

Best Faucet Water Filters 2018: Top 10 of the Most Reliable Brands

Top Resources: Your Ultimate Guide To The Best Gochugaru Substitute

The Latest of the Best Electric Skillets Revealed

What is the Best Kitchen Footwear for Work and Home?

Best Oven Mitts Buyer’s Guide and more Among the Best!